I installed an universal aftermarket wiring harness back before there were nice plug and play options from Painless and American Auto Wire. Since then, I added cooling fans, H4 headlights and a MSD 6AL making the wiring kind of a mess.

Prepping my car for fuel injection, I knew I had to rethink my wiring and build a new harness for the front of the car. I also knew I had to start with an alternator that not only produced sufficient amps at lower RPMs for all of this but also one that produced a clean signal to my battery with minimal RFI. I selected a 105A CS130 as fit all of my stock brackets, was reasonably priced and if I needed a replacement could get one from any local auto parts store. A 91 Chevrolet V3500 diesel turns out to use a V-belted CS130 that happens to have the correct clocking for my application. Everything you need to know about the conversion can be found on Youtube.

You look under the hood of a new car, you will find a bunch of relays centralized in some sort of protective box. This is to isolate sensitive electronics from electrical noise and lower the amperage load on other components. I wanted to duplicate that as close as practical. I bought a premade box which was nice but didn't do what I needed it to do so I ended up scrapping that and laying out my electrical plan on a dry erase board and building it myself. My box is located behind the core support and contains both ground coolant fan relays, both positive triggered high and low beam relays and a ground triggered horn relay. I also left capacity in the box for one more 40A ground triggered relay for a future line lock and 2-3 additional positive triggered, 30A micro relays if I need them. I also needed a ground triggered relay for the fuel pump and one positive triggered relay for the fuel injection computer which are mounted in the trunk and other side of the core support respectively.

This all took a ton of planning, work and time. The planning paid off as everything tested out perfectly the first time and looks much cleaner.

Update: I got the fuel injection system up and running on fuel only. I will do another post on that but ended up with an electrical gremlin that was pretty much terminal but I diagnosed pretty much by pure luck.
These FI systems want a clean 12V constant source that is switched as well as stays on both when the ignition is on and when the engine is cranking but is not connected to the ignition coil. Turns out, I was only able to find one source in my fuse box for that and patched into it. Everything worked perfectly for about 100 miles then the car would temporarily stall but restart like nothing ever happened. I did notice the handheld would reboot whenever it happened but if I had a test light plugged into my fusebox, it would always stay lit as long as the ignition was on.

That in my mind narrowed the issue down to the fuel injection system and I was getting ready to pull it and send it back to Holley for analysis. That was until after 2-3 days of testing every wire, I got pissed, with the ignition on, slammed the door and the test light went out. Great, so now I have an intermittent issue!. To make a long story short, my ignition switch was a cheap autozone replacement and evidently, the ignition signal was just intermittent or dirty enough that it would momentarily drop the signal to the ignition for a millisecond or so, just enough to cut power to the FI computer causing it to reboot but too short to see with a test light or VOM. Slamming the door in frustration simulated the bumps the car must have been experiencing, creating the inconsistent signal to the computer which did not show up any other way.

A brand new AC delco replacement completely cured the problem. But I learned along the way, the source I was patching into on my fuse box ultimately ends up at the ignition coil so I was effectively wiring to the coil but at the fuse box. I tested every lead on the ignition switch and there is absolutely no provision on a GM ignition switch of this vintage for anything that gives you 12V while the ignition is on and cranking that is not connected to the ignition coil. So, for good measure, I isolated this source from the coil by only using it to trigger a relay that draws directly from the battery and added a capacitor to ensure that the FI computer is getting a clean, consistent 12V when it needs to. This will also give me the capacity to do the same when I add ignition control later on. 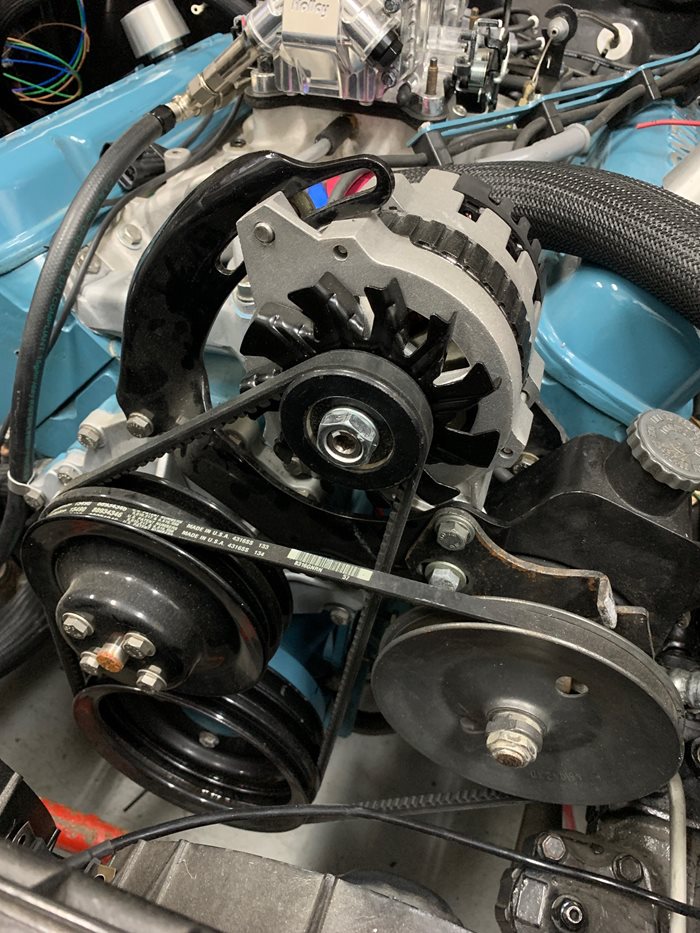 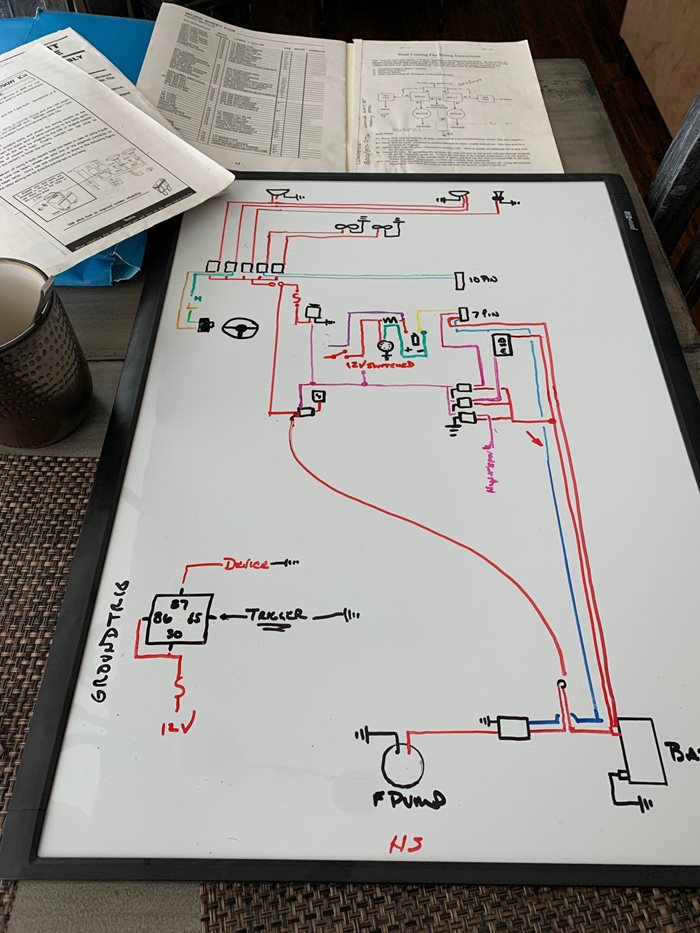 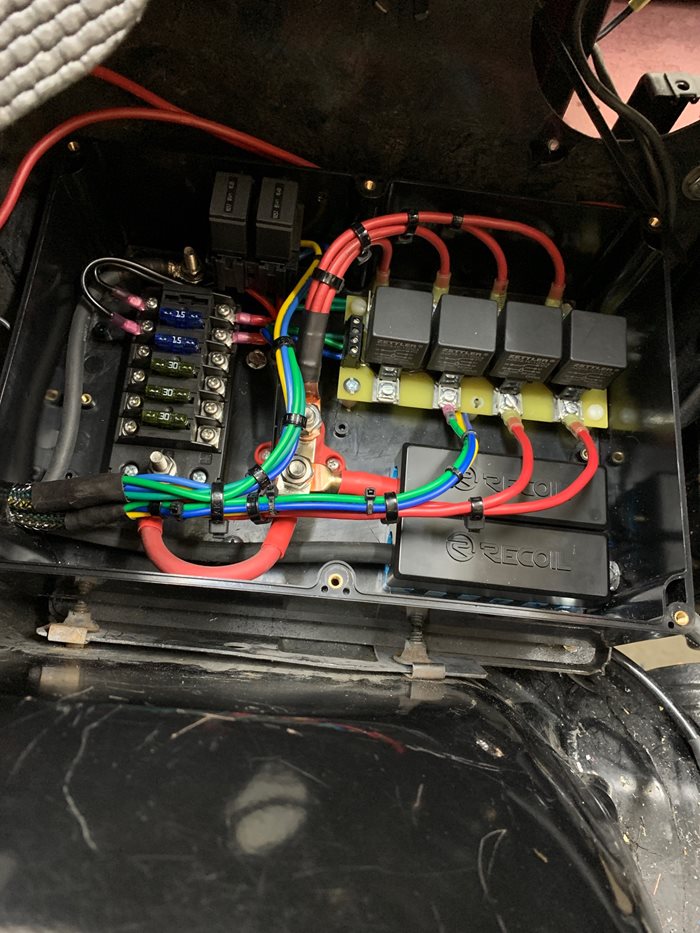 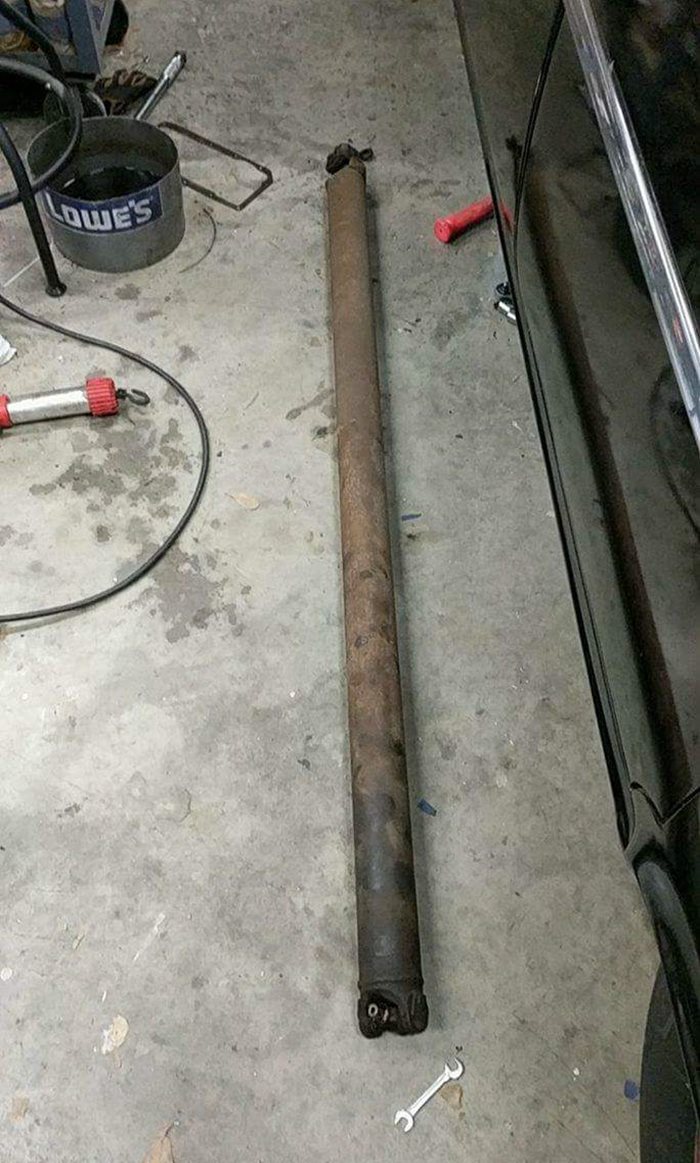 Restomod
Finally got the driveshaft out today. All the bolts came out easy except one, but I was able to eventually get it out.
Comment Like 15 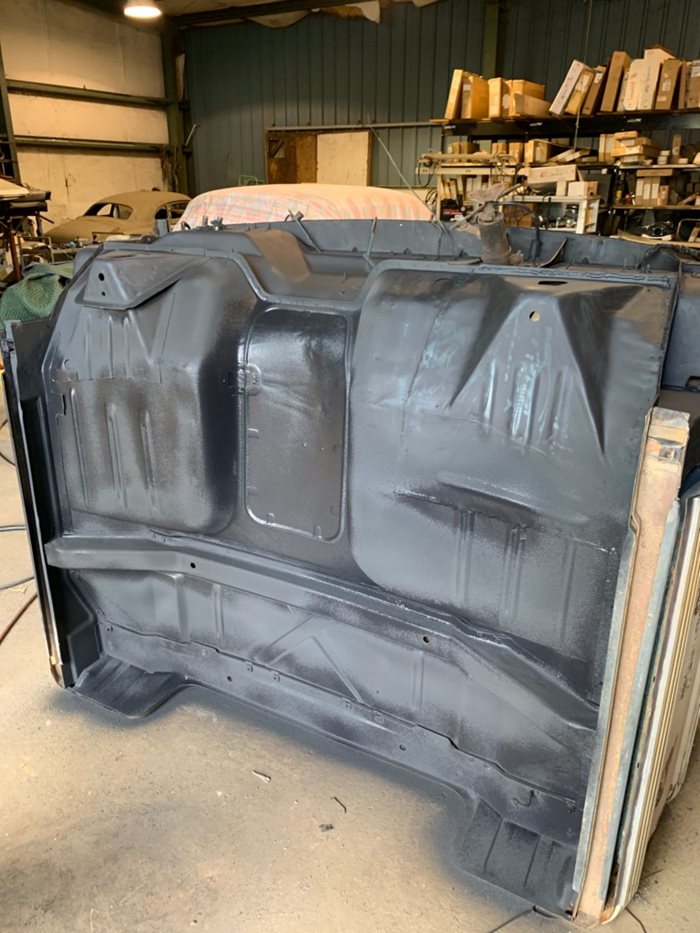 Moving in the right direction.

Restomod
Slowly but surely things are moving. Cab is in the process of getting prepared to go back on the frame.
Comment Like 0 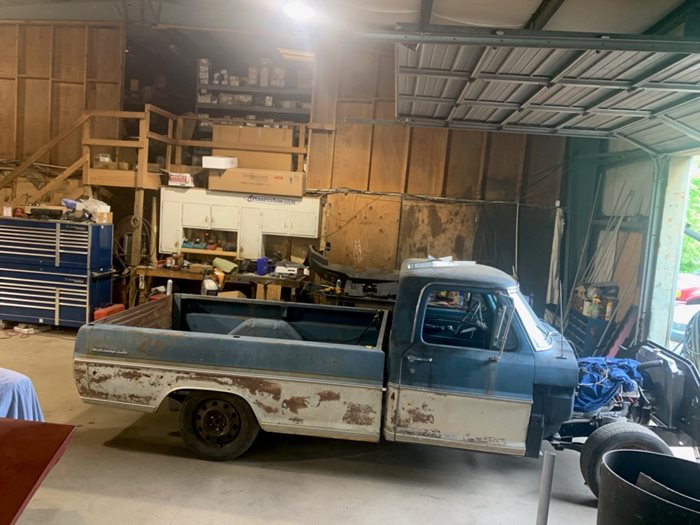 Restomod
I'm excited to see images like this. Doc is getting closer and closer to making his return. Almost starting to think he should have a new name...
Comment Like 1 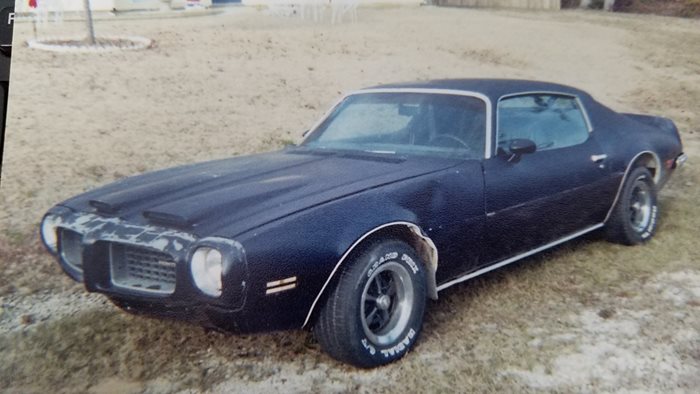 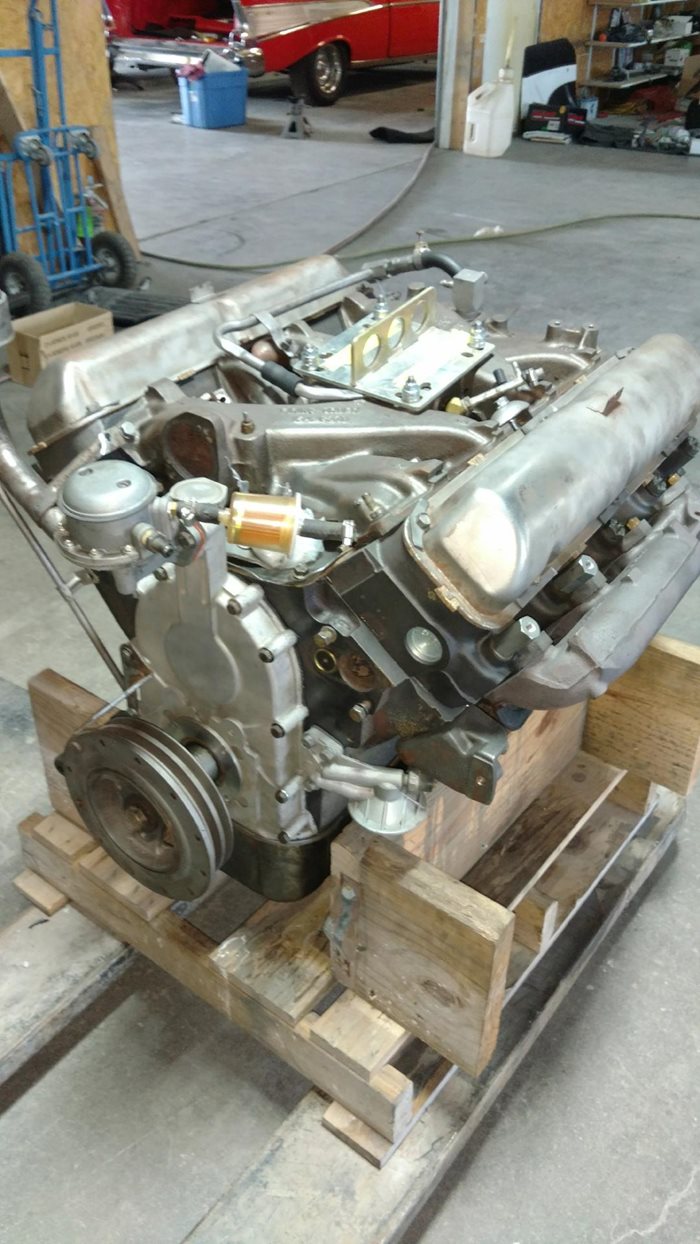 Restomod
Sorry, it's been so long since my last post. We got the rebuilt MEL 430 & trans back from the builder last week, so things should start to happen...
Comment Like 1 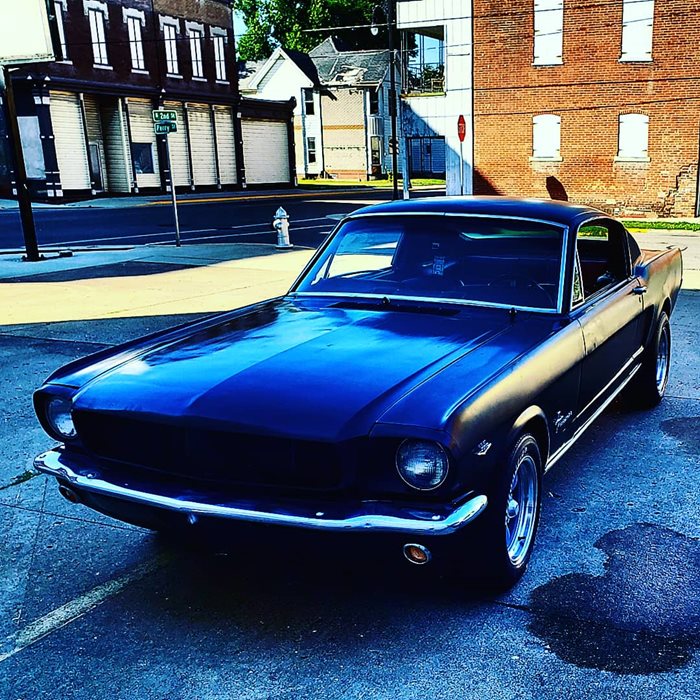